Energy availability and rational use are a pre-condition to a sustainable development.

Diversification of primary energy sources and segmentation into big central units and smaller distributed units is the only sustainable energy model over the long term. 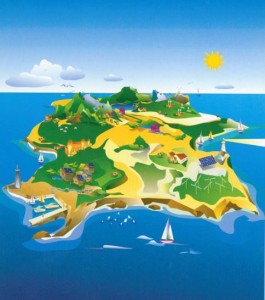 If bringing generation closer to the demand induces substantial savings on transmission costs (today worth up to 20% of total energy production) this approach needs investment and development on two major directions: distributed generators and distribution grids.

The vision is to concentrate on a small scale several technologies for distributed power generation with availability cycle not overlapped (e.g. PV and wind) and generators running on renewable and conventional fuels (e.g. microturbines  running on biomass or natural gas, fuel cells etc.) in such a way to build small “islands” where the different generators communicate and integrate to make the “island” as much similar as possible to a conventional generator from the grid viewpoint.

The key to achieve this target is a so called “micro smart grid” where energy and information flow between the generators and toward the national grid, improving reliability and making distributed generation more acceptable to the national distributors.